If you are interested in buying or selling an artwork by Rosa Rolanda, please send us an email to [email protected] or give us a call to +1 210-305-6528 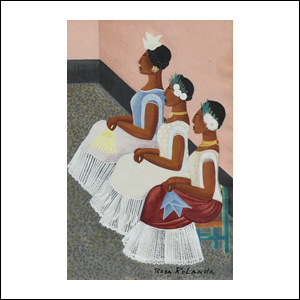 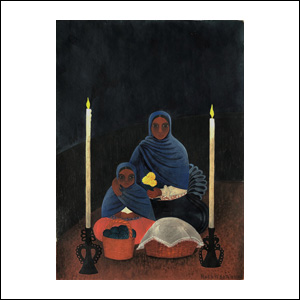 Rosemonde Cowan known as Rosa Rolanda was born in Los Angeles, California on September 6, 1895. Her parents were Harry Charles Cowan of Scottish origin and Guadalupe Ruelas of Mexican descent. Rosa Rolanda was a dancer, choreographer, costume designer, photographer and painter.

From an early age she showed interest in sculpture and costume design. She took gym classes with Marion Morgan, who encouraged her to study dance. In the year of 1916 she was one of six selected from 300 to go to New York and join the Marion Morgan Dancers, whose dance shows were presented in vaudeville theaters. Her first work on Broadway was in the musical "The Lilac Domino". In 1918 she left this dance company to do solo routines and perform her own choreographies. She soon joined the cast of Sigmund Romberg's Over the Top, as a choreographer and dancer. During her free time she took dance and costume design classes. In 1923 she toured England, France and Germany next to the Ziegfeld Follies. It was in that period that many photographers were interested in her, including the surrealist Man Ray and Edward Steichen.

In 1924 Rosa Rolanda returned to New York City to join the cast of the play "Round the Town" by S. Jay Kaufman and H. Manciene and subsequently to "Manhattan Mirrors" by Kaufman as well. After this, Rosa Rolanda ventured into silent cinema next to the French director Maurice Tourneur in films such as: Monte Cristo, Jr., Bluebird, Prunella, Woman and The Glory of Love. Her last performance was in a number called "Rancho Mexicano" that appeared in the year 1925, in which she also did the choreography. It was there that she met the Mexican artist Miguel Covarrubias.

Rosa Rolanda traveled to Mexico for the first time in 1926 next to Miguel Covarrubias. During that trip she had contact with many people from the Mexican artistic environment, such as Frida Kahlo, Diego Rivera, Guadalupe Marin, and Roberto Montenegro. From the beginning of her career Rosa Rolanda showed interest in photography. She was influenced by the surrealism of photographer Man Ray, from whom she adopted the Rayogram technique. But it was until her arrival in Mexico in 1926 that she learned to use the camera next to Tina Modotti and Edward Weston.

Although Rosa Rolanda lived during those years next to Miguel Covarrubias, it was not until 1930 that they married. As honeymoon they decide to take a trip through Asia, in which she planned to take pictures. During the 9 months they spent in Bali, Rosa Rolanda took hundreds of photographs capturing markets, children, and local customs. Miguel Covarrubias wrote the book "The Island of Bali", in which he included 114 photographs taken by Rosa Rolanda. In 1945 she collaborates again with her photographs for Miguel Covarrubias' book entitled "The South of Mexico." Throughout her life she had the opportunity to take photographs in countries such as Indonesia, Japan, Tunisia, China and the Philippines, in addition to touring much of Mexico. Her favorite subject was the portrait of women, girls, boys, as well as folklore scenes. Her work appeared in magazines and publications such as Theater Arts Monthly, Dyn, Mexican Folkways and Harper’s Bazaar.

After several trips, they decide to settle permanently in Mexico City, in the house of Miguel Covarrubias in Tizapan, San Angel. That house soon became a meeting place for characters from the Mexican intellectual and artistic world. Rosa modeled for artists like Roberto Montenegro and Diego Rivera. Immersed in this environment, Miguel Covarrubias urged her to paint, so at the end of the thirties she began to make portraits of her acquaintances, girls, boys, indigenous women, popular celebrations and herself. Her style was influenced by the work of Miguel Covarrubias, but also by post-revolutionary painting and surrealism. She explored different techniques and materials, such as gouache, oil, watercolor and crayon. She sold her works among her nearby circle, stating that she "painted for pleasure." Some of her best-known portraits are "Dolores del Río" (1938) and "María Félix" (1945). In addition, she made sketches for a portrait of Frida Kahlo and others commissioned by some of her friends. In life she declared that she did not like to exhibit her work, so her facet as a painter was not widely known.

In 1954 Rosa Rolanda finally separated from Miguel Covarrubias due to the romance he had with the dancer Rocio Sagaon. Later, in 1958, Rosa Rolanda obtained a scholarship from the Guggenheim Foundation to prepare a book of photographs that would be entitled “Living and Dead. The Dance in India and Bali.“

Rosa Rolanda died in Mexico City in 1970. Luis Barragan was her only heir and executor, so he recovered her personal belongings, which are now part of the Museo Casa Luis Barragan Collection.