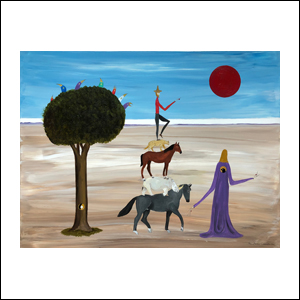 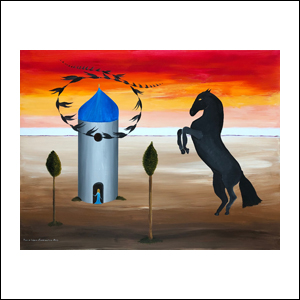 If you are interested in buying or selling an artwork by PABLO WEISZ CARRINGTON, please send us an email to [email protected] or give us a call to +1 210-305-6528 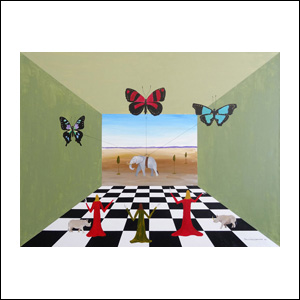 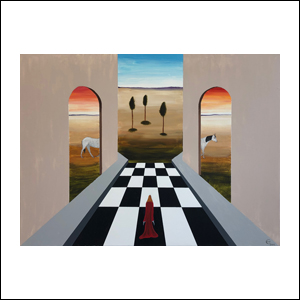 Pablo Weisz Carrington creates scenes that arise from the unconscious, his paintings tells stories as if writing with a brush. I pause at the pictures. Houses with winged horses in the midst of open fields. Solitary trees under red suns, or circular shapes representing the moon. A wolf walking at night. A cylindrical tower in front of a Greco-Roman head where birds emerge. Horses entering a barn are turned into winged horses, flying toward the sun. Desert compositions that make us think about infinite.

The interiors of his rooms have floors like chessboards upon which move parts of life. Here today, gone tomorrow. Whenever at a door or in the background, a window through which you look at the barren landscapes constantly repeated. Heaven and earth together, keep the knowledge to guide men to other horizons and give birth to the world. Landscapes not found anywhere else, only in the imaginary universe of Paul Weisz. Among his paintings things happen. A magician pulls birds out of a vase, a woman purifies her body in a circular tub. Standing children watch mesmerized at a puppet theater. A human sized falcon, looks through a window. Paul’s figures and animals are painted in broad areas of color, they are naive and we go back to the world of storytelling. (Source: By Sofia G. Bugali in Pablo Weisz Carrington, “Between Heaven and the Infinite Suns”, October 2010)

You witness a crow or a man on horseback or foot, a woman usually facing away, a man’s hat and coat that reach the floor. A female figure, elongated hands, also shoulders. Necromancers, Wizards, Alchemists. The world of Weisz talks about evolution, the evolution of souls. His characters are transformed, go to another state of mind, crossing gates, going through windows, flying into the mind. In Celtic mythology, birds and crows generally represent prophetic wisdom. In the Kabbalah, magic, alchemy and the language of the birds are considered secret and key voices leading to a perfect gnosis. In mythology, medieval literature and occultism, the language of birds is considered mystical, used by birds for dialogue with the initiates. Did Paul Weisz express interest in the communication between beings that populate the universe? (Source: By Sofia G. Bugali in Pablo Weisz Carrington, “Between Heaven and the Infinite Suns”, October 2010)

René Magritte is one of the most influential painters in the work of Weisz, as well as the many books offered by his father, Rimbaud, Baudelaire, Mallarmé, and by his mother: Huxley, Shakespeare and the Marvelous Mirror of Pierre Mabille. Kabbalah and the Bible where it all happens have been all books that have filled the inner world of Pablo Weisz Carrington. (Source: By Sofia G. Bugali in Pablo Weisz Carrington, “Between Heaven and the Infinite Suns”, October 2010)