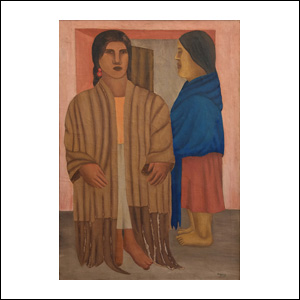 If you are interested in buying or selling an artwork by Manuel Rodriguez Lozano, please send us an email to [email protected] or give us a call to +1 210-305-6528 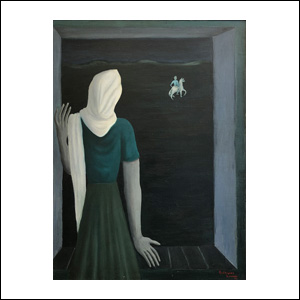 Manuel Rodriguez Lozano was born in Mexico City. The year in which he was born is unknown, but it is close to 1894. He began painting around 1910. He attended the Academy of San Carlos under the teaching of German Gedovius and Alfredo Ramos Martinez. In 1913 he married Carmen Mondragon, who was later known as Nahui Olin. Carmen Mondragon was the daughter of General Manuel Mondragon who was involved in the murder of Francisco I. Madero, so in 1914 the whole family had to go into exile in Europe. They fled to San Sebastian and then to Paris, where he had contact with European avant-garde, interacting with artists such as Matisse, Braque and Picasso. In that same year they had a son who shortly after being born died. His relationship with Nahui Olin was very problematic. She did not like the bohemian life that Manuel had with his friends and accused him of being gay. The couple separated when Manuel Rodriguez Lozano returned to Mexico in 1921.

Upon returning to Mexico, he approached the open-air schools founded by Alfredo Ramos Martinez, and exhibited his work in the Department of Fine Arts and the Academy of San Carlos. In 1923, Jose Vasconcelos, rector of the National University of Mexico, appointed Manuel Rodriguez Lozano as director of the Department of Drawing and Manual Works of the Ministry of Public Education, replacing Adolfo Best Maugard. In those years Manuel Rodriguez Lozano was a teacher of Julio Castellanos and Abraham Angel. It is said that he had a romantic relationship with Abraham Angel, who committed suicide in the study of Rodriguez Lozano in 1924, due to the jealousy caused by Rodriguez Lozano's relationship with Julio Castellanos.

In 1925, after resigning from his position as director, he traveled together with Julio Castellanos to Argentina, to bring an exhibition of children's art that was the result of the application of the teaching system known as the "Best Maugard Method", along with pictures of both artists. This exhibition was presented at the Association of Friends of Art, and shortly after Manuel Rodríguez Lozano gave a conference entitled "The visual arts in Mexico." Subsequently they presented the exhibition at the Museo Provincial de Bellas Artes, also in Argentina. In the same year he exhibited 12 works together with some by Abraham Angel and Julio Castellanos at the Cercle Paris Amérique Latine, in Paris.

A star in the artistic history of Manuel Rodriguez Lozano was Antonieta Rivas Mercado. Captivated by the presence of the painter and influenced by him, Antonieta was the sponsor of editions, plays and cultural magazines, such as: the Ulises Theater, which emerged with the idea of renewing Mexican theater according to what happened abroad, directed by Xavier Villaurrutia, Salvador Novo and Gilberto Owen; and the avant-garde magazines, Ulises (1927-1928) and Contemporaries (1928-1931), headed by Villaurrutia and Novo, and whose editors were Bernardo J. Gastelum, Jaime Torres Bodet, Bernardo Ortiz de Montellano and Enrique Gonzalez Rojo. This poetic generation, named after 1928 as the Contemporaries, was joined by renowned intellectuals and artists. Manuel Rodríguez Lozano as a painter of the "Contemporaries" participated in the exhibitions organized by Xavier Villaurrutia and the magazine Contemporaries, in which works by Agustín Lazo, Julio Castellanos and Abraham Angel were also exhibited.

Between 1926 and 1928, Manuel Rodriguez Lozano edited the magazine Forma, which was directed by Gabriel Fernandez Ledesma. A publication that talked about folk art, but with an aesthetic approach: indigenous and folk art commented by Dr. Atl, Orozco, and other artists.

Another essential figure in the career of Manuel Rodriguez Lozano was the collector and patron Francisco Sergio Iturbe and Idaroff, whom Manuel met through Roberto Montenegro. Between 1932 and 1933 Sergio Iturbe commissioned Manuel Rodriguez Lozano a series of twenty small paintings about the death of Santa Ana, the grandmother of Christ, to place them in line, one together to the other, in one of the rooms of the house of Iturbe (Old Palace of the Counts of Miravalle).

The artistic career of Manuel Rodríguez Lozano has been divided into three periods. In the first epoch that covers from 1922 to 1934 he painted the world extracted from immediate reality. The effigies of the Mexican, works that represent a whole series of characters, women of the town, prostitutes, workers, peasants, neighborhood people, to whom the painter is giving reality in the world of art.

His second period is from 1935 to 1939, known as the "monumental era", identified by the elaboration of human figures of great proportions. Of admirable expressive power, sensuality and color, these almost sculptural bodies, located in different scenarios, have an unbeatable poetic and visual value. They show the sexual duality of the characters with classicist pretensions that celebrate the physical; In them, topics such as neoclassicism, androgyny and metaphysical elements have been observed. The monumental figurative painting of Pablo Picasso, called neoclassical, between 1917 and 1927, seems to be the aspect that Rodriguez Lozano assumes in these large compositions, since during his stay in Paris he frequented Picasso's workshop. On the other hand, the art historian Ida Rodriguez Prampolini affirmed that Rodriguez Lozano was “a convincing case of a soul that can be perfectly linked to a lyrical and poetic fantasy that is twinned, in a subtle and inexplicable way, to the world longed for by the surrealists.”  There are also elements of a metaphysical nature, rather conceptual, in his trajectory. From the series of Santa Ana and the colossal bodies, critics have linked his work to that of the metaphysical painter Giorgio de Chirico.

In 1940 he was appointed Director of the National School of Visual Arts (Former Academy of San Carlos), but before serving a year in the position it was said that some engravings by Alberto Durero and Guido Reni, owned by the institution, had disappeared. He was held responsible and when he was summoned to testify he was imprisoned in the Lecumberri Prison for about five months, until his innocence was proven. Curiously, the engravings later appeared in the same school. During his imprisonment, he painted his first mural “La piedad en el desierto”, which was later transferred to the Museo del Palacio de Bellas Artes in Mexico City. Berta Taracena attributed to this work the beginning of the third era in the career of Manuel Rodriguez Lozano, calling it "white era", identified by the economy of the chromatic range in gray, white, blue, on dark backgrounds, and tragic scenes.

In 1942 Rodriguez Lozano dedicated to Francisco Sergio Iturbe his monograph published by the National University of Mexico. This is the first critical volume of the pictorial work of Manuel Rodriguez Lozano, with an extensive catalog of paintings of girls, ladies, women of town, landscapes and nudes, made between the years of 1922 to 1942, and whose cover appeared the last self portrait he made.

Between 1944 and 1945, Rodriguez Lozano made in collaboration with Nefero, the mural "The Holocaust", which expresses the theme of piety and the sacrifice of man. This mural was also commissioned by Francisco Sergio Iturbe for the stairs of his house, using an arched window in the wall as part of the mural.

In 1948 he was invited by the University of Paris and the Musée de l'Homme to exhibit at the Musée de l’Orangerie. In the 1950s he stopped painting although a portrait of Alfonso Reyes from 1960 is known, in that same year he published an anthology of his essay "Thought and Painting".