If you are interested in buying or selling an artwork by Leonora Carrington, please send us an email to [email protected] or give us a call to +1 210-305-6528 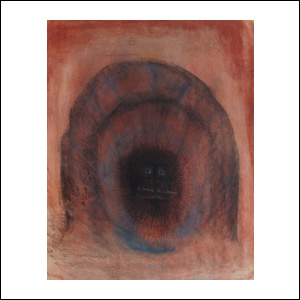 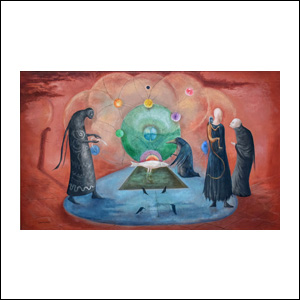 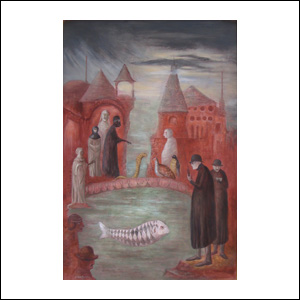 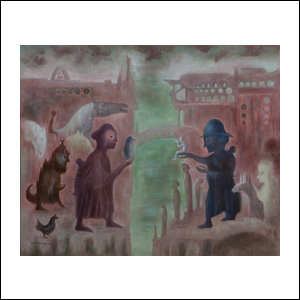 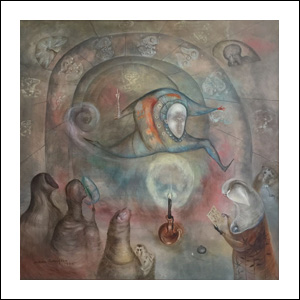 Leonora Carrington was born on April 6, 1917 in Clayton Green, near Chorley, south of Lancashire, England. She was a surrealist painter and novelist who lived most of her adult life in Mexico.

Leonora's childhood played a very important role in the theme that she later developed in her works. When she was three years old her family moved to Crookhey Hall, a neo-Gothic mansion surrounded by vast gardens and forests with views of the Irish Sea and Morecambe Bay. Carrington lived in Crookhey Hall until she was nine years old, there her imagination grew due to the characteristics of the place and the stories that her nanny, her mother and her maternal grandmother told her about Irish folklore, and the Irish origin of her mother and Grandma. At six years old, Leonora Carrington began writing ghost stories and animal fables, as well as drawing pictures inspired by the stories they told her. Later in her professional life, Leonora immortalized Crookhey Hall in several of her works. Her love for horses, which was born when she learned to ride them, also became an important element in her works.

In 1935, at the age of 18, Leonora Carrington took painting and drawing classes at the Chelsea School of Art in London, where she studied for a year. Then she studied for one more year at the Ozenfant Academy, newly opened by the French painter Amédée Ozenfant in London. In 1918, Amédée Ozenfant together with the architect and painter Charles-Edouard Jeanneret, known as Le Corbusier, founded the movement known as Purism. Ozenfant taught her to know the chemistry of the materials she used and contributed greatly to her artistic education in terms of formal painting technique and discipline.

On June 11, 1936, the First International Surrealist Exhibition opened at New Burlington Galleries in London. Organized by Roland Penrose and David Gascoyne, in collaboration with André Breton and Paul Eluard from France. It was a great exhibition of painting and sculpture, mixed with tribal art. That same year, Herbert Read edited the book "Surrealism" along with the exhibition, which included essays by Breton, Eluard, Goerges Hugnet, and Hugh Sykes Davies. In a strange twist of fate, Carrington's mother gave her the book shortly after its publication. This book had a great impact on Leonora, giving her an introduction not only to ideology and surreal art, but in particular to the work of Max Ernst, whom she would soon meet and fall in love with. At that time Leonora collected books on alchemy and Herbert Read's book, constantly mentioned the relationship of alchemy with the production of art in general and with Surrealism.

Max Ernst had a solo exhibition in London at the Mayor Gallery in the summer of 1937. Leonora's friend and fellow student, Ursula Goldfinger and her husband, made a dinner in honor of Max Ernst so that Leonora would meet him. They were introduced and fell in love at first sight even though he was married. He returned to Paris and soon after Leonora caught up with him. When Leonora arrived in Paris, Max Ernst divorced and went to live with her in an apartment. Leonora became an active member of Breton's surrealist circle. André Breton, Paul Eluard, Luis Aragon, Marcel Duchamp, and Yves Tanguy usually met in her apartment.

Carrington's writings have a vital correspondence with her painting and provide a light within her pictorial language. In 1938 Henri Parisot published Leonora's first story, Maison de la peur (House of Fear), written in French in Paris. That same year, two major surreal exhibits included paintings by Leonora Carrington. The first was the Exposition Internationale du Surréalisme presented in Paris at the Galerie Beaux-Arts, in which Leonora exhibited two of her works from 1937, along with that of 60 artists, including Remedios Varo. The second was the last surreal exhibition presented before World War II in Amsterdam at Robert Gallery. In the summer of that year Carrington and Ernst left Paris and moved to a house in the town of St. Martin d’Ardéche, which Ernst decorated on the outside with concrete sculptures and paintings on the walls. There they worked together and alone in their respective studios and shared their literary interests, Max taught her about German romantic literature and she taught him about English black literature.

In 1939 Editions G.L.M. published in Paris a collection of five short stories in French by Leonora Carrington under the title La Dame ovale (The Oval Lady). That same year, with the outbreak of World War II, France declared war on Germany and Ernst was imprisoned along with 100 other Germans who were in France. Carrington remained alone in her house for a few months until a friend helped her move to Madrid in June 1940, there Carrington had an episode of high anxiety and hallucinations being arrested at the English Embassy. Through the intervention of her family, she was imprisoned in the Mental Asylum of Santander, Spain. Her family transferred her to Portugal where she would be shipped to another mental institution in South Africa. Faking stomach pain, she managed to escape and took refuge in the Mexican embassy where her friend Renato Leduc was the ambassador. Renato Leduc married her so that she could leave Portugal together with him. Max Ernst was released and thanks to the help of the collector Peggy Guggenheim he managed to take refuge in New York. A few days later, in the year of 1941, Leonora Carrington and Renato Leduc also sailed for New York, like other artists.

During her stay in New York, Leonora began to paint again, to write, and to interact with other artists such as her former teacher Amédée Ozenfant, André Breton, Masson, Chagall, Duchamp, Fernand Léger and of course with Max Ernst who had married in 1942 with Peggy Guggenheim. Also in that same year in New York, the exhibition “First Papers of Surrealism” was presented at the Co-ordinating Council of French Relief Societies, in which two works by Carrington were presented along with that of the most prominent artists of the moment such as: Ernst, Tanguy, Magritte, Arp, Matta, Chagall, Giacometti, Lam, Delvaux, de Chirico, Oppenheim, Breton, Miró, Klee, Masson, Moore, Picasso, Brauner, Bellmer, Baziotes, Motherwell and Calder.

In late 1942, Leonora Carrington and Leduc moved to Mexico City. Shortly after they divorced, ending the marriage they had formed so that Leonora could escape from Europe. Leonora was welcomed in Mexico and was fortunate to join a surrealist community made up of emigrants who had been fleeing from the Spanish Civil War and World War II. The surrealist movement had begun to develop in Mexico with the arrival of the Austrian painter Wolfgang Paalen and his wife Alice Rahon in 1939. The Peruvian poet César Moro and Wolfgang Paalen organized in 1940 the International Exhibition of Surrealism that was presented at Galería de Arte Mexicano, which brought together the work of artists never seen before in Mexico. Paintings by Giorgio de Chirico, Salvador Dali, Max Ernst, Marcel Duchamp, Victor Brauner, Oscar Dominguez, Esteban Frances, Rene Magritte, Andre Masson, Roberto Matta, Joan Miro, Cesar Moro, Wolfgang Paalen, Francis Picabia, Pablo Picasso, Man Ray, Remedios Varo, Kart Seligmann and Yves Tanguy were exhibited, as well as some paintings by Mexican artist such as Diego Rivera, Frida Kahlo, the photographer Manuel Alvarez Bravo, Agustin Lazo, Manuel Rodriguez Lozano, Carlos Merida, Guillermo Meza, Roberto Montenegro, Antonio Ruiz El Corcito , Xavier Villaurrutia and the Spanish refugee Jose Moreno Villa.

Leonora became friends with the French poet Benjamin Péret and his wife, the Spanish painter Remedios Varo, who had emigrated to Mexico since 1941. Péret and Varo received in their apartment on Gabino Barreda Street the group that had been made up of surrealist painters and writers. Leonora and Remedios Varo formed a very close relationship, they met almost every day. Within the same circle, Leonora met Emerico Weisz (Chiki) , a Hungarian photographer who had also emigrated from Europe, married him in 1946, and they had two children, Gabriel and Pablo.

Leonora continued painting and in 1948 she presented her first solo exhibition at the Pierre Matisse gallery in New York, which aroused the interest of collectors, critics and the media. Inés Amor, director of Galería de Arte Mexicano began to exhibit her work in Mexico. Leonora continued painting and writing, her works began to appear in galleries and museums. In 1960, the Museo de Arte Moderno in Mexico City presented the first retrospective of her work. In 1963, she was selected to make one of the murals of the Museo Nacional de Antropología in Mexico City, which was inaugurated in 1964, entitled The Magical World of the Mayans.

From 1968 and throughout the 1970’s Carrington spent long periods in New York and Chicago. She sympathized with feminist movements by designing a poster for the Liberation of Mexican Women. In 1974, Gloria Orenstein wrote the article “Leonora Carrington: Another Reality” that was published in the main feminist publication Ms. Magazine. She began to be represented in New York by Brewster Arts Gallery, and Ediciones Era published the first book about her work. Several important books on her work have been published as well as numerous studies, essays and articles in different languages.

Although she had already made polychrome wood sculptures in the 1950s, and a silver foundry in 1975, it was not until the 1980s that she began to make bronze sculptures.

The complexity and richness of the works of Leonora Carrington lies not only in the multiplicity of elements that have shaped her imagination, but also in the dimension from which it arises. Her images are formed on the threshold of the worlds associated with the stories, dreams, night life, dreaming, art, poetry, myths and religions.

Leonora Carrington studied over the years all the secret teachings and ways of knowing that reveal deeper realities about the nature of human beings, animals, the cosmos, the soul and the mind. She ventured into the study of Celtic myths, alchemy, Kabbalah, hermeticism, Tibetan Buddhism, Jungian psychology and the Egyptian Gnosticism. However, rather than determining influences, these currents had meaning matches with her visions and deepest intuitions.

Her paintings are populated with strange characters, mythical beasts, plants and animals; hybrid human, animal and plant, animal on human attitudes or situations, and human that behave like beasts. These creatures move in natural and supernatural or undertake mythical, physical and psychological trips.

Her works continue to be presented in the main museums of the world, showing the work of one of the main women of surrealism.