If you are interested in buying or selling an artwork by Ernesto Icaza, please send us an email to [email protected] or give us a call to +1 210-305-6528 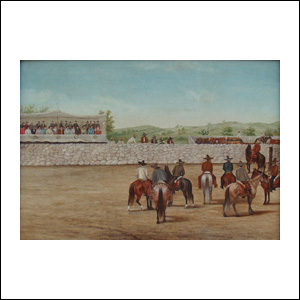 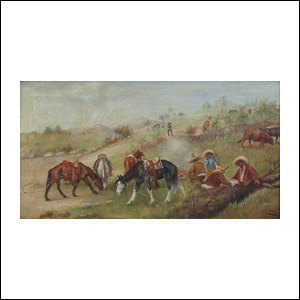 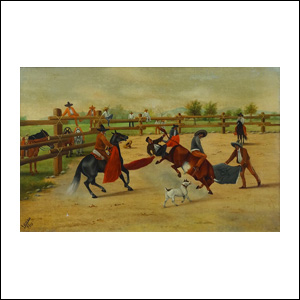 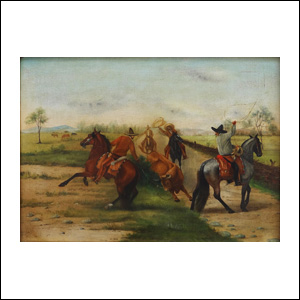 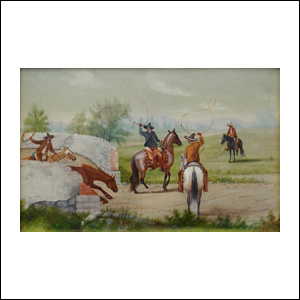 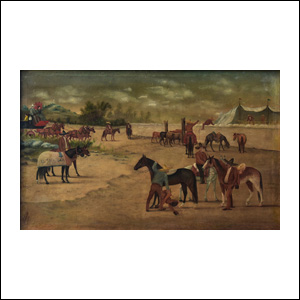 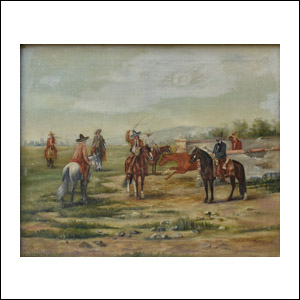 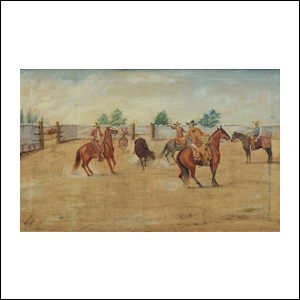 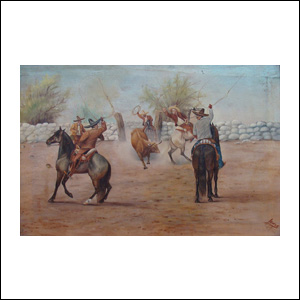 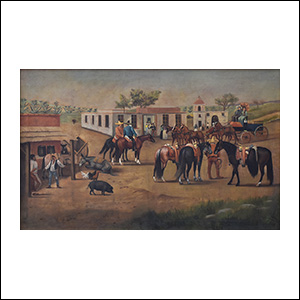 One kind of typical Mexican, with well-defined characteristics of which the authentic is now tending to disappear, is the “charro”, or the ‘country gentleman’, as Justino Fernandez named him in juxtaposition to the city equivalent. Nothing better represents this rural type than his own bizarre figure in his most appropriate environment - that of the rural landholdings, the ranches and haciendas where life is dedicated to the work in the fields or in the pasture lands. Superimposed on this is the elegant figure of the “charro”, with his colorful apparel, with his riding skills on festive days and in tournaments. The “charro” is notable also for his sense of duty and for his sense of honor. (Source: Ernesto Icaza: Un Charro pintor, by Xavier Moyssen, 1987)

Some of the fearful deeds performed by the “charros” in tournaments and festive occasions find their origins in the daily work of the countryside. However, over the passage of time they themselves acquired a festive character and took on an aspect of individual competitiveness. The skills they possess are clearly shown in the so-called ‘lucks’, such as the lassoing of wild horses, bare-back riding and, above all, the ‘tailing’ of a bull, a deed or ‘luck’ only ever practiced in Mexico.

The painter of the “charros” and of their active lives in the countryside has been up to now Ernesto Icaza. He takes his place in Mexican art for being the specialist artist on this theme, in which he has no competitor at all of his standing, and with the advantage that he himself was an excellent “charro”, a person well-identified with everything rural. For this reason, Ceferino Palencia has, with all propriety, described him as the “charro painter”. (Source: Ernesto Icaza: Un Charro pintor, by Xavier Moyssen, 1987)

All of his work refers to the daily life of the “charros” and the activities of a rural environment. His work retains a multiplicity of “charro” scenes which are product of direct observation and personal experience, and it was not in vain that he himself was a “charro” first, and a painter second.(Source: Ernesto Icaza: Un Charro pintor, by Xavier Moyssen, 1987)

The paintings of Ernesto Icaza offer a visual testimony of the type of life that was carried on in the old Mexican haciendas. With a wealth of detail, they are the haciendas and the ranches exactly as they were before the revolution carried through by Francisco I. Madero and the changes brought about by the Agrarian Reform. They were institutions of social, political and economic interest. However, from his extensive production, the works that most attract the attention are those dedicated to the different ‘lucks’ or deeds that the “charros”used to practice. It is said that there were nine of these ‘lucks’, one of which being extraordinarily dangerous, called ‘The Death Pass’, which consisted in jumping from a running horse to a frightened bull running alongside. Some of the titles of the paintings give and idea of this: Tailing in Open Country, Bothering in the Corral, Working in Open Country, Dappled Grey from the Hacienda de San Javier, Flowered Lasso, With the Saddle in the Groin, Lassoing a Wild Mare. (Source: Ernesto Icaza: Un Charro pintor, by Xavier Moyssen, 1987)

In his way, Ernesto Icaza also practiced the art of portrait painting. His subjects, of course, were the “charros”, his old friends, the owners of extensive properties dedicated to horse and cattle raising, or else to the cultivation of maize and the ‘maguey’ plant. these people are often included in the pictures that Icaza was commissioned to paint. He also included himself, his self-portrait, in these works which represent work scenes or festive occasions where the riders showed off their abilities making tricks with the rope, lassoing, or riding bareback on horses or young bulls. (Source: Ernesto Icaza: Un Charro pintor, by Xavier Moyssen, 1987)

Mural painting, something endearing to the Mexican people, was also practiced by Ernesto Icaza. Two of his murals have been destroyed, due, perhaps, to the distance of the locations in which they were painted. He made them on the walls of the main houses in the haciendas de Cienega del Rincon, or Cienega de Mata, situated in the state of Jalisco and property of the Rincon Gallardo family; and in La Cofradia, near the village of Aculco, in the state of Mexico. There exist other murals from his brushes in the hacienda dedicated to the production of ‘pulque’ in Tetlapaya, in the state of Hidalgo. (Source: Ernesto Icaza: Un Charro pintor, by Xavier Moyssen, 1987)

In Mixcoac, an area of Mexico City, Ernesto Icaza died in 1927, and not in 1935 as has been wrongly written elsewhere. (Source: Ernesto Icaza: Un Charro pintor, by Xavier Moyssen, 1987)