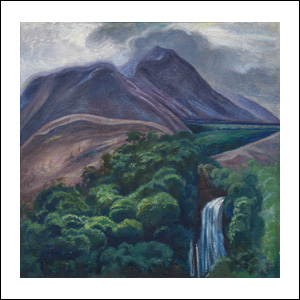 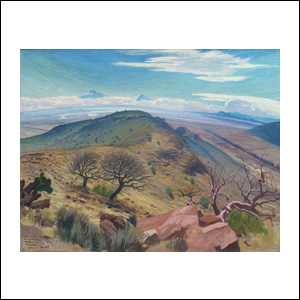 Gerardo Murillo was born in Guadalajara, Jalisco, on October 3, 1875. He decided to name himself with the pseudonym Dr. Atl, which means "water" in Nahuatl and he preceded the title of Doctor. His first painting studies were under the teaching of Felipe Castro in 1890, then he studied in the workshop of Felix Bernardelli, who showed him the transformations that were happening in the European artistic avant-gardes and modernism. Roberto Montenegro, Jorge Enciso and Jose Maria Luprecio, among others, attended this workshop. Later he moved to Mexico City where in 1896 he attended the Escuela Nacional de Bellas Artes (National School of Fine Arts, formerly Academy of San Carlos.)

In 1897, thanks to the official support of the Mexican government, he sailed from New York to the port of Havre in France to set out for Europe, which allowed him to have a solid artistic and cultural training. Before settling in Rome to pursue his artistic studies, he toured various Italian cities. Already in Rome, he competed to enter the Royal Institute of Fine Arts, in the morning, and the Academy of Spain in the afternoon. Atl himself spread the myth that he had been a collaborator of the newspaper Avanti, organ of the Italian Socialist Party, and that he had entered the University of Rome to study Philosophy of History with Antonio Labriola, and Criminal Law with Enrico Ferri, data without registration in the educational institution.

At the Paris Salon, Atl presented his first self-portrait, a pastel on paper dedicated to Jesus Contreras and signed in 1899, which was awarded the silver medal. In Paris he had the opportunity to watch and study carefully the Universal Exhibition of 1900, an important event for impressionist painters, since for the first time they had been given a small space in the Central Hall. This event transcended the evolution of avant-garde arts, not only in Paris but also in Europe.

The spatial resolution of Dr. Atl's landscapes originated at the beginning of the 20th century with the teachings of Italian divisionism through the work of Giovanni Segantini.

Atl returned to Mexico and in 1904 he joined the Escuela Nacional de Bellas Artes (National School of Fine Arts), where he actively participated in multiple academic tasks and political activism. He provoked an arduous debate with Antonio Fabres, deputy director of the campus, by repudiating his teaching system that Atl considered anachronistic for inciting the student to look for his iconographic sources in photographic reproductions, which prevented them from working outdoors. The controversy spread against the director of the school, the architect Antonio Rivas Mercado, with whom he established a long dispute by condemning the Pillet system for teaching drawing. The conflict ended in 1911, with the strike of the students, who, identified with the Impressionist vanguard, demanded the removal of the director and the revision and reform of the pedagogical systems. The student movement resulted in the implementation of new teaching plans and the establishment of Open Air Schools.

From 1911 to 1914, he returned to Paris and there he adopted his pseudonym "Dr. Atl ”, in a baptismal act presided over by the modernist poets Ruben Dario and Leopoldo Lugones, who served as sponsors of the ceremony. During this period his presence in Parisian circles was one of great artistic and political activism. Atl launched the newspaper “L’Action d’Art” with the collaboration of artists of various nationalities and vocations. He dealt with the artistic critic section with reviews of cultural events, and also analyzed the work of the most relevant artists of the moment. His identification with impressionism and post-impressionism was notable.

In 1914, Atl returned to Mexico and joined political tasks with Venustiano Carranza. He made sure that the popular armies under Emiliano Zapata joined Carranza's government. From October 1914 he became director of the National School of Fine Arts. In 1916 a total fracture happened, because Atl supported the electricians' strike. Carranza accused Dr. Atl of being a traitor on the grounds that he exercised sedition against his government. Atl was exiled in Los Angeles, California for a time and upon his return he joined the cultural life of Mexico, thanks to his youth friend Alberto J. Pani, Secretary of Foreign Relations and close collaborator of Obregon. From that moment, all doors were closed to him in the political sphere and he was only allowed to participate in official projects of artistic and cultural nature.

Dr. Atl was able to achieve the goal that he had set to himself: to rescue the landscape as a possibility of modern art, to give it a new meaning according to the time. The results are evident and surprising: Atl abandons the small brushstroke, the traditional perspective disappears and a new perception of the landscape is appreciated, as a historical and cultural memory of Mexico. The curved horizon, the result of the magnificent application of Luis Serrano's curvilinear perspective, is enriched by the explosion of pure color and the superimposition of planes, provided by his Atl colors, colors that he himself invented, made from dry resins that allowed him to work on a wide variety of surfaces. This chromatic quality will make his landscape paintings a living entity, capable of generating emotions and reflecting a cosmic and monumental nature.

Perhaps due to his experience and skill with pastel on paper technique -from his first artistic phase-, and later with frescoes, he felt compelled to seek out more stable materials that could be applied to rigid supports. He was familiar with the technique known as encaustic, but it had the disadvantage of having to be applied hot, and this impeded the rapid strokes and spontaneity that the artist achieved with the pastels. Around 1915 he invented a kind of color bars that could be applied cold, but with sufficient drying and hardening time to be used rapidly and freely. He called them Atl colors. They were a sort of encaustic made of wax, pigment, and resins, manufactured by the artist himself. In spite of the fact that technical and visual outcomes are quite different from those of pastels, the artist achieved innovative effects and also a stability and hardness that thoroughly delighted him. Applying this material as a crayon, generally used for finishing works, produces a pointillist effect that was almost essential for achieving the sensation of atmosphere and the remarkable vibration of colors found in his works.

Throughout his life, he self-portrayed himself on several occasions. This practice was carried out due to his egocentric personality. His image and what he projected was important to him, so he reinvented his appearance and gestures depending on his age and mood.

Atl lived in the convent of La Merced, whose church was destroyed to build the market, only the cloister remained. Atl fell in love with the daughter of General Manuel Mondragon, Carmen Mondragon. They lived as a couple in the convent. Atl gave her a new name: Nahui Ollin, in Nahuatl "four movements". She was a remarkable personality because of her art as well as her beauty.

Atl's interest in volcanoes led him to frequently climb the Popocatepetl and Iztaccíhuatl volcanoes, as well as witness the birth of the Paricutin volcano in 1943. He abandoned all his artistic activities in Mexico City to move for long periods on the slopes of the new volcano. This in order to study it and capture the beauty of the new landscape. He recorded this phenomenon in notes and paintings that he later presented in an exhibition at the Palacio de Bellas Artes in Mexico City in 1944. Thanks to these data, he also wrote the book “Cómo nace y crece un volcán: el Paricutín” (How a volcano is born and grows: The Paricutin).

In 1948 he created a novel modality: the Aero-landscape, that is, views that he draws from an airplane; later, in the workshop he makes the paintings. In his own words: “The Aero-landscape is an optical consequence of a change in spatial position due to the upward movement of a propeller in the upper layers of the atmosphere. The airplane swiftly takes us to the ethereal planes of the airspace. Up up! Above the mountains and the clouds! (Now the landscape is below). Everything has changed. The horizons widen; the wrinkles of the Earth dwarf; the mass of a hill is flatten; the valleys rotate; the mountains that seemed huge to us are actually blue porcelain bibelots on the wrinkled table top. The ridges raise their snow-ridged ridges - waves of a petrified sea. On clear, clear days, under the blue dome of the sky, Earth is a prodigiously polychromatic fantastic map - landscape of another planet lit by another sun. But the clouds come. The cumulus clouds roll over the mountains and transform everything. Gnawing craters, rough ridges of mountain ranges, appear among its vaporous shreds, and chasms open at the bottom of which appear green valleys strewn with mountains like toys. The Aerial Landscape is the tumult of the heavens and the earth made rhythm of beauty in the consciousness of man.”

Dr. Atl was an exceptional character in the broad Mexican cultural life, for his activities, his travels, his projects and his theories, his written work, his texts and of course for his pictorial work. In 1949 he suffered the amputation of his right leg and died in Mexico City, in 1964.