If you are interested in buying or selling an artwork by David Alfaro Siqueiros, please send us an email to [email protected] or give us a call to +1 210-305-6528 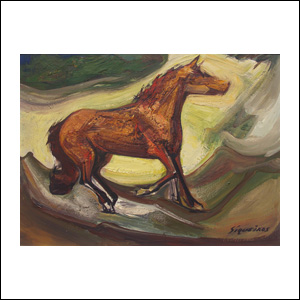 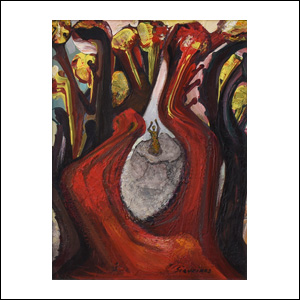 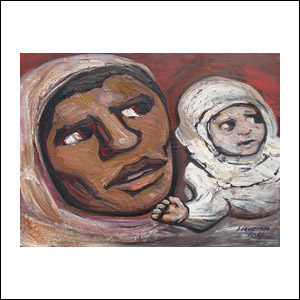 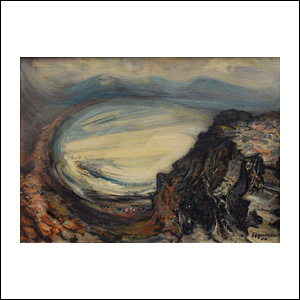 David Alfaro Siqueiros was a Mexican painter considered one of the three great exponents of Mexican muralism along with Diego Rivera and Jose Clemente Orozco. Siqueiros said that he had been born in Santa Rosalia, today Camargo, Chihuahua, on December 29, 1896.

He entered the Escuela Nacional Preparatoria (National Preparatory School) in 1911, and at night attended the Academia de San Carlos. When he was only fifteen years old, he was involved in a student strike at the Academia de San Carlos protesting the school's teaching method and urging the removal of the principal. Their protests eventually led to the establishment of the Escuela al Aire Libre (open-air school) in Santa Anita in 1913.

At eighteen years old, Siqueiros and several of his colleagues from the Escuela de Bellas Artes, formerly Academia de San Carlos, joined the Constitutionalist Army of Venustiano Carranza to fight against the government of Victoriano Huerta. When Huerta fell in 1914, Siqueiros became entrenched in the post-revolutionary internal struggle, since the Constitutionalist Army had to fight the political factions of Pancho Villa and Emiliano Zapata, opposed to Carranza. His military travels across the country exposed him to Mexican culture. After Carranza's forces took control of the country, Siqueiros briefly returned to Mexico City to paint before traveling to Europe in 1919. First in Paris, he absorbed the influence of Cubism, intrigued in particular by Cézanne and the use of large blocks of intense color. While there, he met Diego Rivera and traveled with him through Italy studying the great fresco painters of the Renaissance.

In 1921, Siqueiros published the magazine Vida Americana in Barcelona, ​​Spain, where he presented a manifesto entitled Three calls to the plastic artists of America, in which he writes about the artistic proposals that he had in mind and that he believed were convenient for America. By then Siqueiros had already been exposed to Marxism and had seen the daily lives of the poor. In a new direction for the new generation of American painters and sculptors, he called for a "spiritual renewal" as well as the return of the virtues of classical painting, while infusing this style with "new values" that recognized the "modern machine" and the "contemporary aspects of everyday life". The manifesto also claimed that a "constructive spirit" is essential for an art with meaning, which rises above mere decoration or false or fantastic themes. Through this style, Siqueiros hoped to create a style that would link national with universal art. In his work, as well as in his writing, he sought a social realism that acclaimed the proletarian peoples of Mexico and the world while avoiding the cliches of primitivism and fashionable Indianism.

He returned to Mexico City in 1922 to work as a muralist for the revolutionary government of Alvaro Obregon. In 1923, Siqueiros helped found the Mexican Revolutionary Painters, Sculptors and Engravers Union, which tackled the problem of wide public access through the union newspaper, El Machete. In that same year, Siqueiros painted his famous and colossal mural Burial of the sacrificed worker in the stairwell of the Colegio Chico de San Ildefonso. Despite being fired from his teaching position at the Department of Education in 1925, Siqueiros remained deeply involved in labor activities, in the union as well as in the Mexican Communist Party, until he was incarcerated in the Lecumberri prison in the early 1930s.

Siqueiros went to Los Angeles to continue his career as a muralist in 1932. Working in a collective unit that experimented with new painting techniques using modern devices such as airbrushes, pistols, and projectors. Siqueiros together with a group of students made a mural known as Tropical America, in the Italian Room on Olvera Street in Los Angeles, California. Also in Los Angeles he made the murals Rally in the Street and Current Portrait of Mexico City.

In 1933, in Argentina, he made the mural Visual exercise, in the basement of the building of Natalio Botana, director of the mythical newspaper "Crítica", in which Siqueiros was a columnist for more than a year. The mural was restored and relocated to Taylor Customs in 2010.

Returning to New York in 1936, he was a guest of honor at the Contemporary Art exhibition at the St. Regis Gallery. There he also led a political art workshop in preparation for the General Strike for Peace and the May Day parade. Jackson Pollock attended the workshop and helped build floats for the parade. In fact, Siqueiros is credited with teaching Pollock drip and pour techniques that later resulted in his complete paintings, made from 1947 to 1950, and which constitute Pollock's greatest achievement. The Siqueiros Experimental Workshop only lasted a little over a year until Siqueiros went to fight in the Spanish Civil War in April 1937.

Siqueiros spent most of 1938 with the Spanish Republican Army fighting Francisco Franco's fascist coup before returning to Mexico City. After his return, on a staircase of the Mexican Electricians Union, Siqueiros collaborated with the Spanish refugee Josep Renau and the International Team of Visual Artists to develop one of his most famous works, Portrait of the Bourgeoisie.

Due to his involvement in the assassination attempt against Leon Trotsky, he went into exile in Chile during 1941. Siqueiros, already back in Mexico City in 1946, painted his mural  Patricians and Patricides at the former customs office in Santo Domingo, today Secretary of Public Education. In his house he made the mural Cuauhtemoc Against the Myth and later painted the triptych New Democracy in the Palacio de Bellas Artes. In 1952 he began the project of the murals at the Universidad Nacional Autónoma de México (UNAM), which would be composed of three "sculptures-paintings". Of these three murals, only one was completed: The people for the University and the University for people.

In 1957 he began working on a 420 square meters mural for the Castillo de Chapultepec in Mexico City; known as From Porfirismo to the Revolution. In the lobby of Hospital de la Raza in Mexico City, he created a revolutionary multi-angle mural using new materials and techniques, titled For the Social Welfare of All Mexicans. Then he painted the mural The Man Who Loves and Is Not a Slave to Technology on a concave aluminum panel in the lobby of Polytechnic Institute. He also painted Apology for the Future Victory of Science over Cancer on panels that wrap around the lobby of the Cancer Center.

Eventually, Siqueiros was arrested in 1960 for openly criticizing the President of Mexico, Adolfo Lopez Mateos, and leading protests against the arrests of striking teachers and workers, although the charges were commonly known to be false. Numerous protests ensued, including an advertisement by well-known artists and writers in the newspaper The New York Times in 1961. Siqueiros was unjustly imprisoned, continued to paint, and his works continued to sell. During that stay, he would make numerous sketches for the project of the Hotel Casino de la Selva, owned by Manuel Suarez and Suarez. Due to international pressure on the Mexican authorities, Siqueiros was finally pardoned and released in the spring of 1964. He immediately returned to work on his suspended murals at the Union of Actors and the Chapultepec Castle.

When the planned mural for the Hotel de la Selva in Cuernavaca moved to Mexico City and expanded, Siqueiros assembled a team of national and international artists to work on the panels in his workshop in Cuernavaca. This project, his last major mural, is the largest mural ever painted. An integrated structure that combines architecture, in which the building was designed as a mural, with mural painting and polychrome sculpture. Known as the Polyforum Cultural Siqueiros, the exterior consists of 12 panels of sculpture and painting, while the walls and ceiling of the interior are covered with The March of Humanity on Earth and Towards the Cosmos. Completed in 1971 after years of extension and delay, the mural broke with some earlier stylistic mandates, due to its complex message. Known for making art that was easily read by the public, especially the lower classes, Siqueiros's message in "The March" is more difficult to decipher, it seems to merge two visions of human progress, one international and the other based on Mexican heritage.

David Alfaro Siqueiros died in Cuernavaca, Morelos, on January 6, 1974 in the company of his wife, Angelica Arenal Bastar, who was his inseparable companion since the Spanish Civil War. His body was buried in the Rotunda of the Illustrious People.