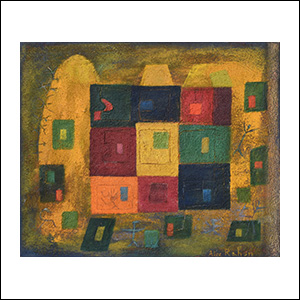 If you are interested in buying or selling an artwork by Alice Rahon, please send us an email to [email protected] or give us a call to +1 210-305-6528 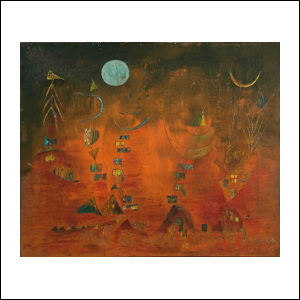 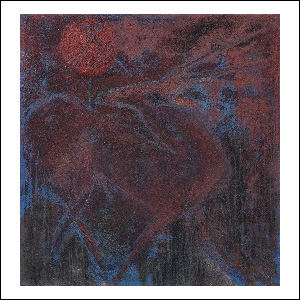 Alice Marie Yvonne Philippot was a renowned surrealist artist and poet. Known at first as Alice Paalen in her poetry and later as Alice Rahon in her painting, as she adopted her mother's surname Alphonsine Rahon. She was born in Chenecey-Buillon in the Doubs, France, on June 8, 1904. She spent most of her childhood and youth in Paris and during the summers she used to visit her grandparents' house in Recouvrance, a neighborhood in the city of Brest, in Brittany. When she was about three years old she suffered an accident in which she fractured her right hip. She remained in a cast for about three years. At the age of 12, she suffered another accident and broke her left leg.

Alice Rahon met the Austrian painter Wolfgang Paalen in Paris in 1931. Two years later, on the recommendation of Joan Miró, they traveled together to Spain and visited the Altamira caves. The discovery of the cave art impacted the couple and played a fundamental role in their development as artists. Alice Rahon's initiation into the surrealist movement occurred in Paris, around 1934, the same year as her marriage to Wolfgang Paalen, a time when Alice wrote poems in free verse. That year they visited the Altamira caves again and during the autumn they made a trip to Greece.

In 1935, Wolfgang and Alice met Paul Elouard and Max Ernst through Roland Penrose. The Paalen couple visited Valentine and Roland Penrose in Le Pouy, in the south of France, where Alice began a deep friendship with the poet Valentine Penrose. Alice had for a brief time a love affair with Picasso that ended with Paalen's alleged suicide threat. In December of that year, André Breton, the father of surrealism, invited the Paalens to formally join the group of surrealists.

In 1936, Alice Rahon traveled to India where she met Valentine Penrose. After disembarking in Bombay, she visited the city of Goa, Pondicherry and continued north where she spent time in an ashram in Mirtola, at the foot of the Himalayas. In India she wrote Muttra and other poems influenced by Hindu culture. She published A même la terre with the support of André Breton in Editions Surréalistes. The book, a limited edition of 235 copies, all of them numbered and signed by the artist, included an engraving by Yves Tanguy.

In 1937, Alice Rahon worked as a designer with Elsa Schiaparelli. She subsequently opened her own hat boutique in Paris. She posed for Man Ray modeling the hats that were featured in La mode au Congo exhibition at the Charles Ratton Gallery. The photographs were published in Harper’s Bazar magazine.

In 1938 Alice published Sablier Couché (Editions Sagesse) with an engraving by Joan Miró, a publication that was praised by André Breton who recognized her creative talent and wrote her a beautiful letter on the occasion of the publication. In his eyes, more than a book it was "a talisman." André Breton from 1920 already visualized associating poetry with a painting that “would translate it without betraying it”; he imagined that each painting thus conceived would become a "window" into the poetic experience.

In 1939, the Paalen couple set out on a trip to America in the company of the Swiss photographer Eva Sulzer. In May they landed in New York where they stayed until the summer. From there they left for Alaska and British Columbia in search of the art of primitive cultures that still conserved that spiritual energy. During the trip, Alice Rahon made a unique sketch of the totems, published years later in the magazine Dyn, and began to dabble in the use of the brush. On September 7, they arrived in Mexico City at the invitation of Frida Kahlo and were received precisely by Frida Kahlo, Diego Rivera and Juan O'Gorman. They settled in the San Angel neighborhood. In Mexico, they gradually reunited with their surrealist friends exiled in Mexico: César Moro, Remedios Varo, Benjamín Peret, Leonora Carrington, Esteban Frances. This group was joined by other Mexican figures who shared Alice and Wolfgang's interest in pre-Hispanic cultures, among them Miguel Covarrubias and his wife Rosa Rolanda. The Paalens were enriching their already large collection of primitive art from Oceania, Alaska and British Columbia with archaeological and popular art pieces that they acquired during their multiple expeditions through Veracruz, Oaxaca, Guerrero, Yucatán, Michoacán and other regions.

From her arrival in Mexico, Rahon devoted herself to painting, exploring various techniques that she enriched with sand and sgraffito. The fascination for primitive art is constant in the work of Alice Rahon. She considered it closely linked to magic, to the realms of the invisible. The theme will appear again and again in her poems and in her pictorial work. Both in technique and content, her paintings refer to ancient times. The colors, the textures, the signs, the sgraffito, the symbolic figures make up her own cosmogony; the pictorial imaginary reveals her vision of reality. The encounter with André Breton and surrealism was fundamental for Alice Rahon and marked not only the transition from the poetic image to the visual image that occurred after her arrival in Mexico, but also the conception of the totality of her artistic creation. Alice Rahon's work is presented with this surrealist ideal of achieving the perfect consolidation of the visual image and the poetic image. Her contact in Paris with the avant-gardes of modern art and her close link with surrealism allowed her to acquire an impressive visual training, but it was Paalen who introduced her to the craft of pictorial practice; in Alice's words: “as a painter, I owe everything to him […] from him I learned not to mix the color beforehand but to put it in such a way that it blends in the eye of the beholder”.

Alice Rahon first exhibited her paintings at the International Exposition of Surrealism in 1940, organized by Paalen and César Moro at the Galería de Arte Mexicano. She presented three watercolors: The Eyeless Queen, Du jour au lendemain and Rendez-vous des riviéres. In 1941 Alice published Noir Animal, her third and final compilation of poems, illustrated with a portrait of her by Paalen.

Alice Rahon arrived in Mexico at a time when figurative painting related to the so-called Mexican School predominated. Along with Wolfgang Paalen, Gordon Onslow-Ford, Gunther Gerzso and Carlos Mérida, she ventured into abstract painting, creating works that take the form of appearances, of representations of an "interior model" that reflects, following André Breton , “That which, although it does not exist, is as intense as that which exists” and that consists of “real visual images”. The theoretical discussions about art that were published in the magazine Dyn, that Wolfgang Paalen published and that Alice Rahon contributed with poems, vignettes and illustrations from 1942 to 1944, and the compilation of essays by Paalen, which appeared in the first issue of Problems of Contemporary Art under the title of “Form and Sense”, provoked in Alice Rahon reflections about the function of the image. The image, Paalen points out, should not be reduced in any way to the prolongation of the memory of a perceived entity or to the organization of visual fragments dispersed in memory. "The true value of the image ... consists in projecting a new realization, which does not necessarily have to be related to an existing object." Through abstract forms Alice Rahon sought to express cosmic sensations linked to space and time. Alice Rahon, like Paalen, captured in her canvases the subtle interrelation between surrealism and abstraction, between the rational and the irrational, between art and science. The theoretical and aesthetic contributions of the group of artists exiled in Mexico who gathered around Dyn undoubtedly laid the foundations for a new direction of painting in Mexico.

Alice Rahon presented her first solo exhibition at Galería de Arte Mexicano in 1944. In 1945 she met the writer Anaïs Nin in New York, with whom she established a very close relationship. From the mid-1940s Alice Rahon produced a series of works that evoke her trips to real and imaginary cities inspired by the work of Paul Klee. Alice admired the painting of the Swiss, whom she met through Paalen. In the mid-1920s Klee conceived a series called The Book of Cities, made up of paintings with handwriting signs that marked his taste for the cultures of the East. The Islamic world gave him the vision of a synthetic, abstract perception, formed by the integration of pictograms that suggest mythical, eternal spaces that Alice adopted.

In 1946 Alice Rahon acquired Mexican nationality and continued to present her works in both solo and group exhibitions in Mexico and the United States. Inspired by her trip to India, she wrote the script and designed a series of articulated puppets to represent the characters in an Orion-inspired cosmic ballet, "The Great Man in the Sky." In many ways the conception of the ballet goes back to Pablo Picasso, with whom Alice had a brief but intense romance around 1935. Picasso conceived several ballets, including Mercure (1924), which made a deep impression on André Breton and the group of surrealists.

In 1947, Alice Rahon divorced Wolfgang Paalen and met Canadian Edward Fitzgerald, filmmaker and set designer, whom she married. She frequently traveled to the bay of Acapulco, because in that year her friend Anaïs Nin bought a house on the beach of Caleta.

Fitzgerald and Rahon made an experimental film entitled Le Magicien. For this project Alice designed the costumes, puppets, and wrote the screenplay, while Fitzgerald provided set design and direction. The film was never distributed due to a lack of budget and the only existing copy, which was presented to groups of friends and artists and at the Willard Gallery in New York, unfortunately disappeared. The only vestige that remains consists of a few photographic shots of the shoot.

For the catalog of her exhibition at Williard Gallery in New York in 1951, the artist wrote a poetic text to define her aspirations towards a magical and ethereal world that could only be reached through painting: At the beginning of time painting was magic; it was a key to the invisible. In those days the value of a job lay in its spell power, a power that talent alone cannot achieve. Like the shaman, the sibyl and the magician, the painter would have to become a humble being, so much so that he could enter into the manifestation of spirit and forms.

Alice Rahon divorced Edward Fitzgerald in 1960. On the opening night of her exhibition at Galería Pecanins in 1969, she fell down the stairs and broke her hip again. She was secluded at her home in Las Flores. In 1975, after its exhibition at Galería de Arte Mexicano, Alice Rahon stopped painting. One of her last paintings was "A Giant Called Loneliness." The Museo del Palacio de Bellas Artes in Mexico City presented a retrospective exhibition of her work in 1986. A year later Alice Rahon died in an asylum in Mexico City.