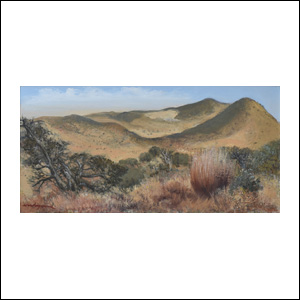 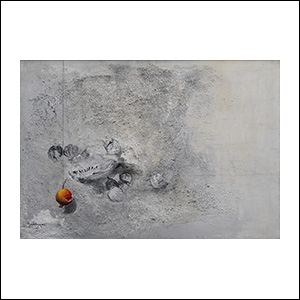 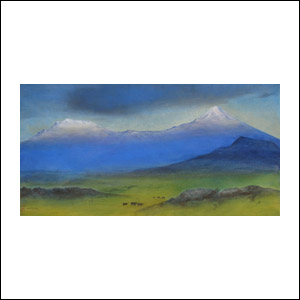 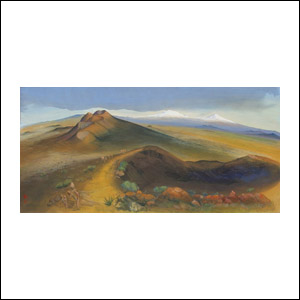 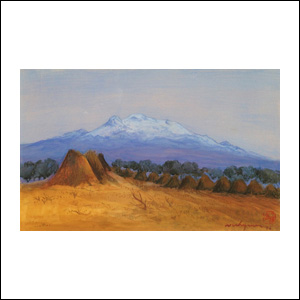 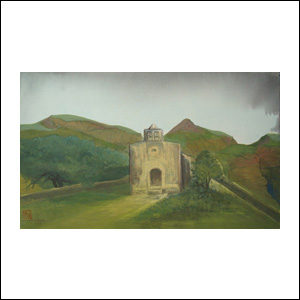 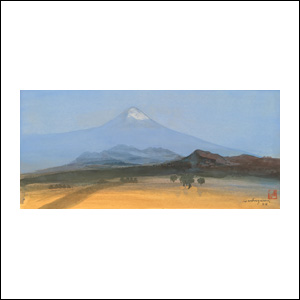 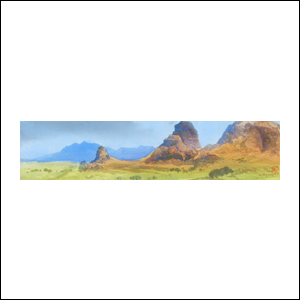 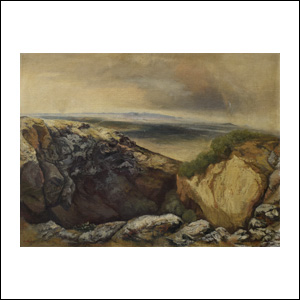 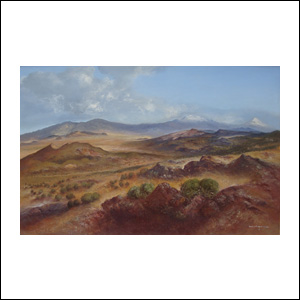 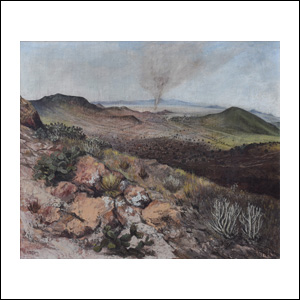 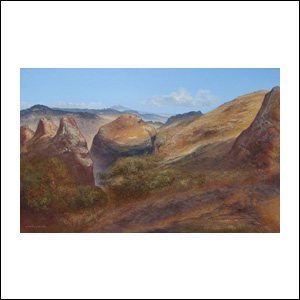 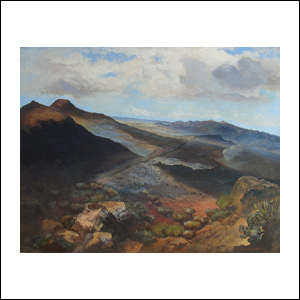 Luis Nishizawa was born on February 2, 1918 at the San Mateo Ixtacalco Estate, in Mexico State. He was a great Mexican painter and muralist of the 20th century. Its origin was Japanese on the side of its father and Mexican by its mother. These roots of ancestral and geographically opposed peoples were a determining factor in his painting.

His artistic training began around 1942, the year he entered the Escuela Nacional de Artes Plásticas in Mexico City, formerly known as the Academia de San Carlos, at a time when mural painting with a strong nationalist accent was in his apogee. During the five years he studied, he had distinguished teachers such as Julio Castellanos, José Chávez Morado, Alfredo Zalce and the Spanish refugee Antonio Rodríguez Luna, among others. He learned from Castellanos the measure in composition and the delicacy in the outline of the drawing. He inherited from Zalce and Chávez Morado the interest and identification with muralism with an ideological content; while he adopted Rodriguez Luna's tendency towards abstractionism. In 1947, Carlos Alvarado Lang, director of the Escuela Nacional de Artes Plásticas, supported an initiative launched by José Chávez Morado: school practices, a project that was baptized "Painter's Holidays" and that encouraged students to travel to other places in Mexico to make landscape painting. The budding artists visited different regions of the country. They saw the Paricutín volcano, Chalma, the Mezquital, Tepoztlán, Santa María Regla, the Valley of Mexico and some reached Chiapas. From these school practices, Luis Nishizawa adopted the custom of plein air painting or painting in the open air, a practice that José María Velasco had already done when traveling all over the country to capture the most beautiful landscapes in Mexico, and that Luis Nishizawa would also carry out throughout his life.

Nishizawa mainly worked on painting in its various techniques, from the easel painting to the mural composition, he also explored graphic art and sculpture. In his works the two cultural currents that nourish him are substantially manifested: the Mexican, in its reality, and the Japanese, of fine lines and poetic oriental expression.

In the first half of the 1950’s his work was very attached to the theme and style of the Mexican School of Painting, he made pictures representing the customs of the rural people and indigenous communities. Although, he also painted still lifes and landscapes, this last genre would be the one he mainly developed and in which he achieved his greatest recognition.

In 1951, Luis Nishizawa exhibited paintings and ink drawings in his first solo exhibition at the Salón de la Plástica Mexicana; after such an event, his works soon caught the attention of art critics. Jorge Juan Crespo found in his work a marked influence on the painting of José María Velasco, who, in 1942, had received a National Tribute at the Palacio de Bellas Artes in Mexico City. Crespo said: "His landscapes are painted with a great sense of space ... Faced with his vast panoramic pictures and a clear and limpid atmosphere, making us remember Velasco." Another critic in the Revista de Revistas, April 15, 1951, mentioned about him: “Like Doctor Atl, he gives his landscapes depth and breadth, his perspective is curved, giving an idea of ​​the prolongation in space. Its color is true, faithful and always vibrant ”. The great artist David Alfaro Siqueiros affirmed: “Nothing… has his work of formalist inclinations, that is, of abstractionist inclinations. With extraordinary talent and frequent great mastery, this work shows a manifest desire to surpass the realism of the past ... to make the space deeper, the volume more voluminous, the texture more pleasant and to make movement more mobile, in a general sense of expression". Jorge Juan Crespo also commented: "It also seems to me not to betray his Japanese origin in those same landscapes because in some more than others, and especially in his drawings, the synthetic style and a supreme elegance of lines are noticed, of the Hokusai and Hiroshige ... “

As for the presence of orientalism in the landscapes of Nishizawa, it became more palpable as his mastery grew. Luis Nishizawa relates the impact on him caused by the exhibition of prints by the Japanese painter Ando Hiroshige, held at the Palacio de Bellas Artes in Mexico City in 1937, thanks to the poet José Juan Tablada, who brought to Mexico a good collection of Japanese art. Nishizawa followed the path of the Japanese master. Due to Nishizawa fondness for that art, Alfredo Zalce shared with him some Japanese "dry inks". Nishizawa began to experiment in his works with Japanese inks and techniques, an activity that little by little permeates his production of painting with exact light and synthesis . Thus Siqueiros and Crespo would be prophets of Nishizawa's particular style and contribution to the landscape tradition in Mexico that had begun a century earlier with José María Velasco. Both in the inks of Nishizawa, as in his oils and temples, the color is applied with fine brush strokes to give volume to the objects or mark the distances in the depth of the horizon; everything is done with careful subtlety. There is a synthesis of the forms: thus they insinuate, rather than represent, the heights of the hills and mountains, the slopes of the valleys or the impressive cuts of ravines; the fog seems to envelop everything except the height of the elevated volcanoes.

From 1950 his landscape paintings were exhibited abroad. First in Haiti, at Salle D’Art Du Pavillon Mexicain, Port-au-Prince. In 1952 at the Tate Gallery in London and later in Paris and Stockholm, as part of the contingent of Mexican art that represented Mexico. In 1958 he was selected among the five most outstanding artists at the Tokyo International Biennale.

In the pursuit of one of its roots, the desire of Nishizawa to get closer to the artistic manifestations of Japan can be inscribed. In 1963, he studied metal engraving with the Japanese engravers Yukio Fukuzawa and Ichikowa. In 1964, he traveled to Japan for the first time, where he took a short course in woodcut at the Center for Japanese Artists. In Mexico he practiced Taku Hon with the Japanese artist Toneyama on pre-Hispanic reliefs (tombstones, lintels and jambs) of the Mayan area. These Taku Hon, which means hand-stone-book, are obtained in China and Japan by pressing a special paper or fine silk on the reliefs of the tombstones and ancient tombs with the utensils used for this purpose.

Although in 1949 he was part of the founding group of the Visual Integration Workshop, directed by his teacher José Chávez Morado and under the auspices of the National Institute of Fine Arts, it was between 1957 and 1959 that he executed his first mural painting The Air is Life, in the lobby of the hospitalization building of the Pneumology Unit of the Medical Center. This mural was rescued after the 1985 earthquake and relocated in the lobby of the 21st Century National Medical Center. In 1969, he made the mural A Song to Life, for the Celaya Social Security Unit, in which he used for the first time high-temperature ceramics in irregular cuts according to design. In 1981, he made in the city of Tokyo a high-temperature ceramic mural The Creative Spirit Is Always Renewed, at the Keisei subway station in Narita. In 1987, he made in Toluca for the library of the Centro Cultural Mexiquense, a ceramic mural for which he was inspired by ancient pre-Hispanic books and codices; and the mural The Bed of the Universe with stone reliefs on a slightly curved wall in the Museum of Modern Art, at the aforementioned Mexican Cultural Center. In that year he also made a stained glass window in the General Archive of the State of Mexico, in Toluca. In 1988, he made a mural on oil on canvas at the Attorney General's Office in Mexico City. He also did the murals The Image of Man (1992) in the Ministry of Public Education, and Justice (2010) in the Supreme Court of Justice of the Nation.

In parallel to his artistic creation, Luis Nishizawa was always committed to education. From 1955 to 2003 he worked as a teacher at the Escuela Nacional de Artes Plásticas (National School of Visual Arts). He was always giving classes and workshops. In 1992, the Museo Taller Luis Nishizawa was inaugurated in Toluca. This museum and workshop was created in recognition of his creative work, as well as his performance as art teacher. The institution functions as a museum and workshop, as well as a documentation center on the artist for researchers and the general public. Its main function is to preserve and promote the artist's works and contains around 800 works in various media. It has seven rooms for temporary exhibitions, a library and spaces for concerts, conferences and workshops of ceramics, engraving and drawing.