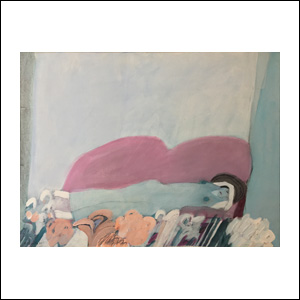 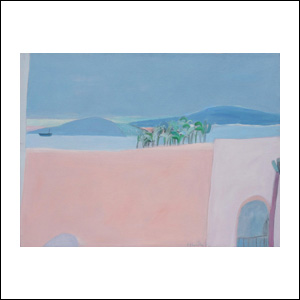 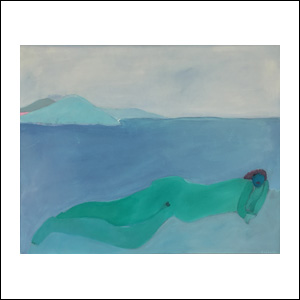 Joy Laville (Helene Joy Laville Perren) was born in the city of Ryde located on the British Isle of Wight in 1923. She was a Mexican nationalized painter and sculptor. Both her preparation and her artistic career were developed in Mexico. She devoted herself mainly to painting, although she also made bronze sculptures and engravings.

She spent her childhood on the Isle of Wight, in the English Channel, which is reflected in her art thanks to her color palette and frequent reference to the sea. As a child she showed interest in art and painting, but she interrupted her studies due to the outbreak of the Second World War, in which she participated by joining the Yorkshire “Observer Corps”. Her mission was to detect and position the planes on maps when they were flying over English territory.

At age 21, she married Kenneth Rowe, a Canadian Air Force gunner, with whom she went to live in Canada for nine years and with whom she had her son Trevor Rowe. In 1956 she moved to Mexico with her son, who was then five years old. She settled in San Miguel Allende, Guanajuato. From 1956 to 1958, she studied painting at the Allende Institute, her only formal artistic education. At that time she signed her works as H. J. Rowe, her married name. In 1959 she met the painter Roger von Gunten, who moved to live with her in San Miguel Allende for a couple of years.

In 1964 he met the writer Jorge Ibargüengoitia. The following year she started dating him and in 1968 she moved to Mexico City after she sent her son to university in Vancouver. In 1973 she married Jorge Ibargüengoitia. When Ibargüengoitia's mother died, they decided to live in Europe, spending time in London, Greece and Spain before settling in Paris in 1980. Ibargüengoitia called her "The lilac woman" and sometimes referred to her as "Cleo" in his writings. Ibargüengoitia died in a plane crash in 1983, while Joy Laville was at her home in Paris. She continued to live in Paris until 1985, and then returned to Mexico to settle near Cuernavaca, Morelos, where she continued painting until the last days of her life. Her works have been exhibited in different galleries and museums. In 2012, she received the National Prize for Science and Arts from the Government of Mexico for her work throughout her life.

The colors that Joy Laville almost always used - lilac, mauve green, mint green, pink, white, gray and, of course, all the shades of blue - agree on a network of tonal relationships that make her visual art unmistakable.

The color in her work helps - as Matisse wanted - to express the light; but not the physical phenomenon, but the only light that matters in art: light in the artist's mind. Her colors translate the essence of things, the landscapes and the beings she loves, while at the same time attesting to her emotions.

Her works are kind, pleasant, beautiful, they allow to be seen and lived and offer a hospitable balm to the look. However, in order to see clearly and to do justice to her painting, we should leave aside the anecdotal aspects that populate her work - her childhood on an English island surrounded by fog; her overseas voyage from England to Canada; her transplant to a country of dry plateaus and lush palm trees and beaches; her enjoyment for literature, for poetry; her inclination towards solitude; her marriage to a famous writer who died in a tragic aviation accident; her independence maintained at all costs; her passion for traveling -, and the first thing that should be seen and considered in the case of a painter, and especially of a painting, is how the paintings are painted.

When seeing the paintings of Joy Laville, we can not but recognize that they are very well done. In them there is a pictorial cleverness that is far from the supposed puerile simplicity of its themes and the hypothetically naive emotions that in us arouse. One has to be very distracted to think that the deceptive candor that reigns in the paintings of Joy Laville comes from its naivete like artist. Definitely not. It is born of her love for painting, the patient recognition of her craft, the structuring of a personal language, the intensity of her vision and her ability to share it.

The wise restraint of her palette, the soft harmony of her colors, the economy of the media, and love more than evident by a few familiar themes and objects are tempting traits in establishing relationships between her work and that of others colleagues of their same aesthetic progeny: Matisse, Morandi, Avery, to name just a few examples. But this is the easy part of the task. Much more difficult is to try to distinguish in what does not resemble one artist to another. Where her faithful and inimitable originality lies.

The originality of Joy Laville's vision - more than that of her painting - lies in the way she has resolved the contradiction that can be felt between the open-air art of the landscape and the intimacy of her spaces. How has this artist achieved that the great extensions of the mountains and the sea produce in us a feeling of quiet stillness, of home air, of familiarity? To a large extent thanks to Matisse's lessons and the colors she uses: soft pastel tones that invite relaxation. She has also succeeded in by means of her way of drawing: all the figures, elements and characters that appear in her paintings have been simplified in such a way that only their most intimate features remain, which produces a sort of interiority and complicity with those who look. On the other hand, one would have to ask if Joy Laville is indeed a landscape artist. She is not. At least not in the usual sense. She never paints the natural. His landscapes are mental, emotional, memorable, sentimental …

Both the shape and the extensions of the surfaces in her paintings are dictated by the expansive or reconcentrated needs of the color. If to this we add that their spaces, however they allude to large surfaces and distances, are solved in very simple, flat forms, assembled as in those puzzles for small children that have only a few pieces, we will see that there are form and visual reasons, as well as psychological and cultural, to feel that in her work are balanced, so precarious, a series of contradictions between the open and the closed, the great and the small, the public and the personal.

Her paintings are constructed with simplified shapes that are distributed in large areas of almost solid colors, or worked in very closed ranges, within a very fair and delicate palette. And while it is true that her painting has become increasingly abstract, she never leaves her figurative references in oblivion. Joy Laville balances her compositions with a few essential elements and forms, eliminating during the process all those superfluous details that do not contribute to the total harmony of the painting.

About this artist it could be said something very similar to what Mark Rothko said in making a heartfelt evocation of his teacher and friend, the New York painter Milton Avery: "He always had that naturalness, that accuracy, and the inevitable integrity that can only be achieved by those artists gifted with magical means; for those who were born to sing ... " she was born to sing with colors and to paint with a naturalness that has cost her a lot, but that can have effects that could be described as "magical" in who contemplates her paintings.